Posted on May 14, 2019 by Dan DiBella Posted in Our Publications, Scotch Plains Monthly 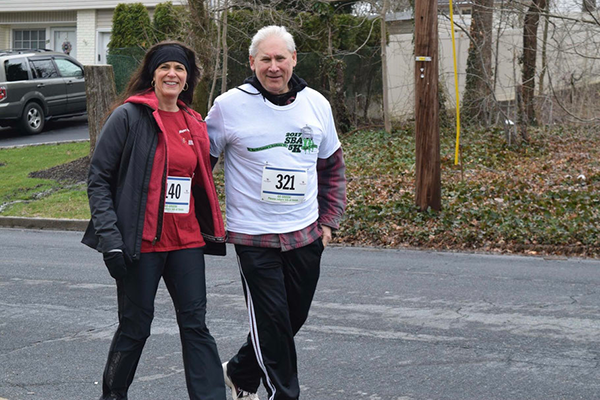 (above) Mayor Al Smith and MWC Program Director Margaret Heisey participate in one of the 5K events in Scotch Plains that qualify for a Mayor’s Medal.

“It is an honor for Scotch Plains to be designated as a Healthy Town to Watch for 2018. The residents of Scotch Plains continue to be supportive and involved in our Mayors Wellness Campaign. With the distinction of this honor, it is my hope that even more residents will participate in our events. This has been a very rewarding experience for both myself and Margaret Heisey, our program director. Not only do we have fun as we offer opportunities to our residents to become healthier by eating well, exercising, and managing stress, but we have seen our own health improve as well,” said Mayor Al Smith.

Each year communities participating in the MWC complete a comprehensive application outlining the research they’ve done to identify their community health needs, explain how they have organized their local MWC committee, and highlight the actions they’ve taken to make their communities a healthier place to live, work, and play.

Scotch Plains applied for the award and submitted, among other requirements, two flagship programs:

Mayor’s Medal Program – An incentive program to encourage residents to participate in the many 5Ks available throughout the year. Residents who participate in at least three races are invited to the final council meeting of the year where they are presented with a medal.

Start with Hello – An anti-bullying initiative that teaches children and adolescents how to be more socially inclusive and connected to one another. After the Parkland shooting, residents raised concerns about bullying in schools. As a result, Mayor Al Smith became a Sandy Hook Promise Leader. He worked with Dr. Hayes, the SP-F Superintendent of Schools, to introduce the Start With Hello Program into each school’s curriculum starting in the Fall of 2018.

The MWC is now in its 12th year. The Quality Institute provides participating communities with a toolkit on how to get started, guidance on how to identify local health needs, and examples of specific actions that other communities are taking to improve health and wellness in their community.

For more information about the MWC in Scotch Plains, go to scotchplainsnj.gov/departments/mayor-s-wellness-campaign.