More than 3 out of 4 N.J. hospitals perform too many c-sections risking mom, baby’s health, report says

The percentage of New Jersey hospitals delivering babies by cesarean section without medical necessity — a practice that can place mothers and their babies at risk of serious complications — declined last year but remains higher than the national average, according to a report released Wednesday.

The Leapfrog Group, a national nonprofit group which studies hospital quality and safety, recommends no more than 23.9 percent of babies be delivered surgically.

The national rate exceeded the goal, at 26.1 percent last year, but New Jersey was even higher, at 27.84 percent.

Only 11 of the 49 hospitals which delivered babies in New Jersey met Leapfrog’s standard:

Hudson Regional Hospital in Secaucus recorded the highest c-section rate among any New Jersey at 55 percent. A message left for the hospital was not returned Tuesday.

The American College of Obstetrics and Gynecology and the Society for Maternal Fetal Medicine warn surgical births occur too frequently without consideration of the risks, the report said. When not medically required, cesarean sections put mothers at risk of infection and blood clots, prolong the recovery process, create chronic pelvic pain and may cause problems in future pregnancies. For infants, c-sections put them at greater risk of developing diabetes and breathing problems, such as asthma. 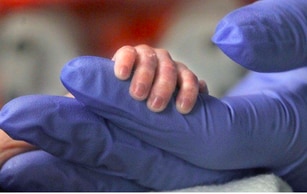 N.J. hospitals still perform too many of these risky procedures

Of the 47 hospitals in New Jersey that deliver babies and submitted data for analysis, only 9 met Leapfrog’s standard of an acceptable number of c-sections.

Linda Schwimmer, the president and CEO of the Health Care Quality Institute, a nonprofit research and patient advocacy organization, said despite New Jersey’s stubbornly high c-section rates, she was encouraged by the commitment hospitals are making to improving maternal health. All but one of the 49 birthing hospitals, Memorial Hospital of Salem County, participated in the Leapfrog survey, compared to three holdouts from the prior year.

Eight of the 49 hospitals met all three goals Leapfrog set involving reducing the number of risky obstetric procedures: c-sections, early elective deliveries and episiotomies, which involves an incision made in the mother’s perineum to ease delivery.

“We want to congratulate these eight hospitals for making the commitment to providing high quality care in their labor and delivery units,” Schwimmer said. “And we encourage other New Jersey hospitals to continue working to meet these important measures. We’ve seen that a focused approach of looking at the data, sharing best practices, and discussing each Cesarean section is leading to better performance.”

Robin L. Perry, who chairs Cooper’s Department of Obstetrics and Gynecology, attributed its low c-section rates to having obstetricians staffed around the clock, a large Maternal Fetal Medicine division, and a team of doctors who also teach at Cooper Medical School of Rowan University. “In these dual roles, they work to safeguard that every (c-section) has a clear evidence-based indication,” Perry said.

It was only eight years ago, when New Jersey hospitals delivered more than one-third of all babies surgically, a staggering c-section rate of 38.8 percent. But attention to the problem led by the New Jersey Hospital Association, Leapfrog and most recently Gov. Phil Murphy and First Lady Tammy Murphy, have made improving maternal health a top priority.

New Jersey ranks 45th for the number of women who die during or after childbirth, according to America’s Health Rankings, a report by the United Health Foundation.

“Cesarean births are a major surgery that increases the likelihood of birth complications, such as maternal bleeding, infections and blood clots,” state Health Commissioner Shereef Elnahal said. “While these procedures can save lives, too many women in our state are experiencing preventable c-sections, which are putting them at unnecessary risk for injury or death.”

Earlier this month, Murphy signed a law that would prohibit the state Medicaid program from paying for medical unnecessary c-sections.

“New Jersey has begun turning the corner on its historically high c-section rates,” said New Jersey Hospital Association President and CEO Cathleen Bennett. “We know that approximately 90 percent of women who have a c-section for their first delivery are likely to deliver by c-section again with any subsequent pregnancies. That’s why this is an important focus area – ensuring a safe vaginal delivery without the risks that can be associated with a c-section.”